On legitimate terms, Miitomo has been out for about a week in the US. Since then, I’ve made friends, been asked questions, asked others questions, bought clothes, took dumb pictures and wasted time online looking at other people’s dumb questions. That sums up the game pretty well. And so far, it’s been worth it. Even if it wasn’t, I lost nothing out on it since it’s free. But honestly, it’s a unique, fun little app.

Nintendo stated at its announcement that Miitomo’s purpose is to socialize with friends and learn things about them you may not have known and it does just that. I only have five friends but I’ve already heard and learned things about them that I would not have known prior to Miitomo. Mostly because Miitomo gives you the chance to ask random questions like, “What is [Blank]’s best feature?” to “What celebrity does [Blank] look like?” and it DOESN’T come off as creepy. You can also ask yourself and answer questions like, “What’s a movie you’ve fallen asleep watching?” You can also get repeat questions that ask things like “How has your day been?” or “What have you been doing lately?” every so often.

Answering or liking questions, along with commenting on questions, net you a daily bonus of Miitomo coins to use to buy clothes, candy or play Miitomo Drop. Candy allows you to pick a question from a friend you want answered and Miitomo Drop lets you play a minigame to win special outfit pieces. As well as Miitomo coins, you also can earn Platinum Points for your MyNintendo account, which can be used for many rewards such as games, game discounts, Miitomo outfits and tickets and who knows what else in the future.
It’s worth mentioning that on MyNintendo, you can also earn Gold coins for purchasing Nintendo games digitally, which presumably will benefit future rewards you can receive, Miitomo-related or not.

Within Miitomo is a feature called Miifoto, which allows you to use Miis and placed them in premade pictures or pictures of your own. There has been a slew of crazy images that have come out since Miitomo’s release. Some funny, some dirty, some just…wow. There are so many ways you can situate your Mii, it’s actually quite astonishing. Similar to Mario Maker, Nintendo gives you the tools to use your imagination to the fullest.

What really sets this app apart from other Nintendo products is that there is no regulation. You can make your Mii curse, put in provocative scenarios, dress obscenely, you name it. To me, this is kind of a double-edged sword: On one hand, it’s great to have freedom to say, show and do whatever you want. On the other hand, I don’t want people to expect this to be the future of Nintendo and throw fits when the next Mii-related thing on their consoles are more stricter. But we’ll see what happens.

If there’s one big knock against Miitomo, it’s the battery issue. On my first day of playing Miitomo, it beat out all my other app’s battery usage percentage the past seven days in just ONE day. Turning on the Power Saver option in Miitomo’s settings definitely makes a difference but it still uses more power than almost every other app. As long as you aren’t using Miitomo for three hours straight though, you should still make it through the day. 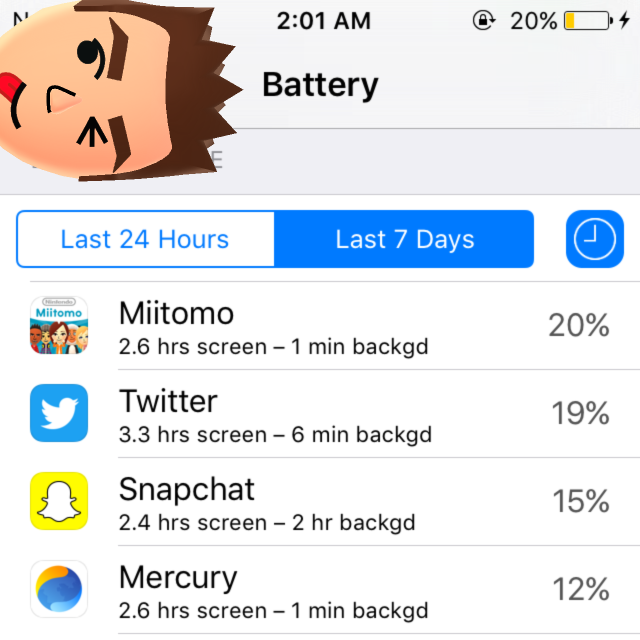 In my week of playing Miitomo, I’ve racked up good amounts of coins and tickets, asked questions that normally wouldn’t be asked and learned a few things about other people. Considering it’s already been downloaded a million and a half times on the US iOS store alone, I’d say there’s still a market for Nintendo.

Overall, the app succeeds what it set out to do and more, considering that Miifoto has allowed everyone to engage in the fun. While they haven’t probably made a lot of money off of this app, it’s clear their main goal was to reach out, grab everyone’s attention and get people talking about Nintendo. So far, it’s working pretty well. Let’s see how well it goes into the future.

May 18th, 2022
Today was the first time that I kind of pushed myself to finish my playthrough recordings so I'd be on track to upload them this week. My commentaries for them felt a bit strange and I felt a little disappointed I wasn't as "into it" as I normally am.
Upon thinking on it further however, I see they came out the way they did because I'm trying to keep to a schedule. And while it is nice to make things when you only feel the urge, I really want to try and make consistent content which does mean you have will have to work sometimes when you don't necessarily want to.
With that perspective in mind, I felt really satisfied with how it all turned out now. I hope I'm able to keep this effort up!