Announced in September of 2016 on-stage at Apple’s iPhone event, Super Mario Run created waves. Stock prices shot up for Nintendo and everyone had something to say about the game.
My inital reaction at first was surprise. I was watching Apple’s event, completely unexpecting the apperance of Nintendo and Mario. But I also had a feeling of dread. If it was just a typical Mario game but on a phone, my faith in Nintendo would’ve dropped significantly. As the demonstation played out, however, I became comfortable and even intrigued by the elements being shown on-screen.

Mario has the face of someone who just farted in a room full of people and ran out before they realized.

The game would be an ‘auto-runner’ but not the usual App Stores ones that are clearly inspired by Temple Run. Also, the game would be held in portrait mode, rather than landscape mode like many platforming games do.
Over the next few months, more and more of the game would be shown off and people had their say about how it look good or bad but I didn’t really follow any news. Instead, I wanted to experience the game upon release. As of the time of writing, it’s been about a week since Super Mario Run’s release. Here are my thoughts: 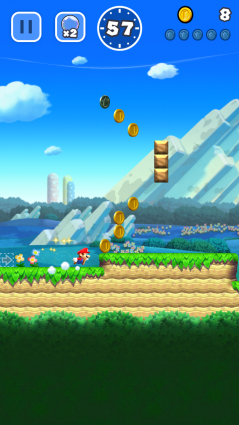 Super Mario Run is (as of now) an iOS-exclusive game made by Nintendo, featuring the titular plumber in another quest to save the princess of the Mushroom Kingdom, Peach. It’s the story we’re all familiar with but the difference this time is the gameplay.
Instead of the traditional platforming the series is known to have, Super Mario Run puts the focus on timing the jumps. Mario will always be moving towards the right while the player controls when he jumps and how high. Running into an enemy or ledge will automatically make Mario go over it, allowing him to do some pretty slick parkour moves.

Based on that description alone, the game probably sounds boring and pretty typical. But there’s a little bit more to it than just that. The difficulty of the game doesn’t come from beating the levels. Each level comes with three different sets of five coins. Collecting all five in one run will unlock the next set, with each set increasing in difficulty. Some of these coins can only be obtained through precision and timing.

That’s not all Super Mario Run has to offer, though. Outside of playable levels, you can customized and improve your castle and kingdom, adding in new buildings and special houses. These can be purchased with all the coins you’ve collected upon beating levels. But some buildings will need the help of Toads to be built. Toads can be gained from playing Toad Rally, which is the online portion of the game.

Toad Rally is essentially a score-attack mode, where you compete against other players on a timed, endless-looping level. The goal is to get the more coins than your opponent. By pulling off stylish moves, you can active a ‘Coin Rush’ which will shoot out more coins for you to collect. At the end, if you beat your opponent, you’ll gain more Toads to utilizing in building your kingdom. On the flipside, losing will take away Toads in your kingdom. You’ll find yourself at times asking, “HOW THE HELL ARE THEY WINNING?” while playing this mode.

Finally, if you own Nintendo products, you’ll be happy to find out that you can earn MyNintendo coins in Super Mario Run. The coins can be used to purchase special items for Super Mario Run or to gain discounts on other Ninteno products. So far, they’re pretty easy to gain but they might change that so if you’re someone who uses a bunch of coins, act fast.

NO TOAD DON’T DO IT

And that’s pretty much it. The game is free to download but to unlock all the levels will cost you $10. Aside from the levels, the full game opens up levels that hold other playable characters, like Luigi and even Princess Peach. It also allows you to gain different colors of Toads in Toad Rally.

I wouldn’t say the price of $10 is steep but it is a change in the usual format of ‘freemium’ mobile games. On the other hand, buying the full game unlocks everything without having to worry about spending more later down the line. Overall, it probably won’t make Nintendo a ton of money in the long run but it is honest and upfront.

Super Mario Run was built from the ground up specifically for mobile devices and it shows through its gameplay and content. The game runs flawlessly on the iPhone 7, with the only hiccups being the occasional dropped connection, even on the home WiFi. You won’t get the full ‘Mario’ experience but for $10, that’s not what you should be expecting.

Nintendo has shown off their craftsmanship once again by building a game around its hardware, rather than trying to make hardware fit their game. You may not like the style of the game, which is perfectly fine. But no one can say it’s a poorly made, cheap knock-off. Passion went into the making of Super Mario Run, which is the same way many beloved Mario games have been made. And it’s that passion that makes it a true Mario game.

11:02pm May 30, 2021
While playing Final Fantasy X-2 just now, I came across an early game boss that I wasn’t able to steamroll past. I actually had to grind in the area (carefully, since some of the enemies were stronger than me) in order to be strong enough. The idea annoyed me at first but I felt very satisfied once I was able to win.

This game was made in 2003, a time where graphics improved greatly but older gameplay elements like grinding were still used commonly. I don’t doubt they’re still difficult RPGs out there but I haven’t heard or played any in recent years that have the fine balance between time and determination.

It’s funny, I never imagined the day where I’d be the old gamer yearning for yesteryear, yet here we are. 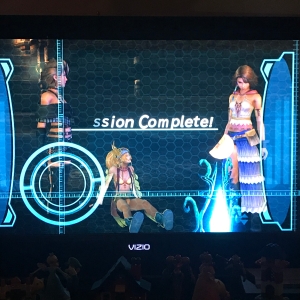